Ish Monroe, another two tour angler, works hard at his craft and for his sponsors. This season will be full with appearances and lots of professional fishing tournaments. As such, he’ll again run two boats, and his FLW Tour wrap will feature Lowrance as his title sponsor.

“I wouldn’t have been as effective as an angler without Lowrance Electronics on my boats all these years,” said Monroe. “Being able to see the smallest changes in bottom depth or composition has been very improtant to me as a shallow water specialist, and my Lowrance HDS and HDS Touch fishing systems have always given me that ability. Read More

Ish Monroe, Part 2: The Busiest Man In The World

Not long ago, it was Ish mashing the monsters at Amistad with his West Coast tricks. Fast-forward to Okeechobee and it’s 7-pound shootout events just a few years ago. And who could forget Ish just about calling his shot in Major League Fishing?

Numerous pros have more wins, some have won a lot more money. But when Ish is near the top, everyone knows it.

The previously mentioned MLF seems tailor-made for someone of Monroe’s caliber: A guy who plays to win, but loves doing so in front of the camera.

Monroe currently competes on the Bassmaster Elite Series and FLW Tour as well, and is quick to point out that all three circuits have their own appeal.

“FLW does a great job promoting for its sponsors,” he says. “And B.A.S.S. has built a brand that people follow. But MLF allows the fishermen to do the same thing for themselves and their sponsors regardless of who they are."

By this, Monroe insinuates that MLF is allowing its featured fishermen to build themselves as the promoted brand, as well as the supporters and sponsors of those fishermen, a la reality TV. Ever heard of Troy Landry, Uncle Si Robertson or a work-dodging kid named Chumlee? Wonder why they’re so drastically more popular than bass fishing stars?

Monroe continues: “MLF brings out the reality of tournament fishing without using the same old mold." Ish’s marketing side then kicks in “The fans of Bassmaster and FLW are the real hardcore fishermen. But the fans of MLF are the real hardcore fishermen and the occasional anglers. And it’s those occasional anglers that you want buying your product. For them, it’s almost like an infomercial." Complete Story

An Inside Look At Ish Monroe

One of the real perks of this job is rubbing elbows with the Tour pros. While I find myself included in many competitive circles in my own right, I love hearing the inside scoop from the best in the business. The level to which these guys take this sport fascinates me daily.

Many of you commented about the series I did on Michael Simonton, and the struggles he's endured in trying to establish himself on Tour. This week and next, we’re going to look into a polar opposite character in every sense of the word as we’re delving deep into one of bass fishing’s most unique characters: Ish Monroe.

I’ve always been a fan of Ish. Nowadays, I love the fact that he takes power fishing to the extreme no matter what body of water he’s on, certain of his domination at each event.

Back at the start of his career, I admired his confidence and enthusiasm for all things involved in bass tournament competition. He propelled himself into the sport’s top tier through tournament performance, an incredibly grueling schedule, and some of the best promoting and marketing in the business. He did it all in the face of long odds as a kid from California, throwing everything in the ring and going for it. Complete Story

Since he left his California home in January and headed out on the 2013 tournament trail, Ish Monroe has slept a grand total of zero days in his own bed. The few days he spent in Las Vegas last week for ICAST were as close as he'll get to home for a couple more months still.

This is nothing new for the veteran of several two-tour seasons on the road. Having the kind of success he's had so far this year has made it a bit easier to be away from the comforts of home, however.

He's one of seven anglers to have fished both tours this season and his average finish of 37th across the 12 events (six FLW, six Elite Series) so far is tops among them, just ahead of Jason Christie, who's won three times. He's cashed checks in all but two events and will be looking for his 11th straight money finish when the Elite Series shifts to the St. Lawrence River in early August. Read More 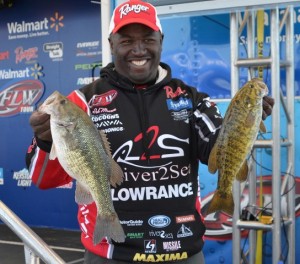 There are many lakes around the country that face extreme amounts of fishing pressure.  Bass in lakes that are the size of a small state can become less hospitable with the amount of pressure that they get when a big tournament is in town.

We’re not just talking big as in the terms of a Bassmaster Elite Series or FLW Tour event coming to town; but also big as in sheer numbers of boats on the water.

For instance, the week prior to the FLW Tour hitting Grand Lake this past week, there was reportedly a 400 boat tournament that happened on the lake.  A Nichols Marine tournament there routinely draws over 250 boats and they host four events a year.  During the peak season, Guntersville; or any other TVA lake for that matter, can look like a parking lot with bass boats lined up fishing ledges.  California’s Clear Lake will have tournaments scheduled for at least 90-percent of the weekends each year. Read More

Flippin’ Hooks need to be one thing: strong.  Ish Monroe took that one necessary trait and created a hook that is both strong, and protects the line from damage due to heavy tungsten weights crashing on the knot at the line tie repeatedly. Learn More